GRO-KASHI is based upon an ancient fermentation concept ( Bokashi aka Silage ) utilized in all cultures. Learn more about this ancestral fermentation techniques used by humans for healing and connecting to nature. These fermented liquids (Kvass, Kombucha, Beer, Wine, Mead, etc.) have provided essential enzymes and antioxidants for human survival for thousands of years. The leftovers, called the dregs, became drugs for humans as well as a specialty fertilizer for the garden.

These brews contain high amounts of probiotics which would preserve foods for long periods of time and deliver immense amounts of nutrition. The bacteria and fungi, which digested and fermented the foods, added additional metabolites and enzymes that made the end product better than it started! Preserved foods would easily last throughout the cold winters while strengthening the body. The beneficial microorganisms living in these brews were used outside in the garden soil at the start of the new harvest season to revive the soil.

GRO-KASHI is a fully-loaded battle chest for nature’s superheroes to create life in the harshest climates. Send your microorganisms into battle equipped with the finest minerals and nutrients made bio-available by a scientifically fine-tuned solid state fermentation process.

Fermentation in ancient times kept many people alive. Not only does it preserve the harvest through the winter, but it was a source of healing medicine. Ancient bone records show that the fermenting of beer and other drinks produced compounds that boosted immune systems. Meads and other brew turned water into an elixir of enzymes, antioxidants, and vitamins. Fermented products like Kvass were used to heal common ailments and known to put humans in touch with sacred realms.

The Ancient Art of Fermentation

GRO-KASHI is mostly organic, ancient red wheat bran fermented with Effective Microorganisms, a technology created by Dr. Higa in Japan. This consortia of beneficial bacteria and fungi have been selected and sourced from our earth to provide regenerative and symbiosis in natural systems. Many of these microorganisms are useful in the soil for decomposition, immune defense, mineral update, and water retention. Scientists have discovered that these microorganisms, many of which are naturally found in the human body, are also useful for cleaning up oil spills and algae-filled lakes.

Plants grown with probiotics and prebiotics like GRO-KASHI can be shown to have higher levels of mineral density using a BRIX meter. Higher mineral density is correlated with plant health and overall flavor. The probiotics help break down the rocks and minerals in order to deliver humic to the plants. In a synthetic system, plants often cannot absorb all essential minerals it needs to grow.

By using GRO-KASHI, you are essentially giving the plant what it needs to feed a healthy and strong human being. The plant will have, in its soil, everything we need to live symbiotically with the earth. The bacteria and fungi, are equipped with the GRO-KASHI which was specially formulated to keep the microbes alive and flourishing. The goal is to have more nutritious plants and a more nutritious farmer by the end of the season!

By observing and feeling the forces of nature, we can learn to capture its beneficial elements for our own healing and prosperity.

IMAGINE HOW A RAINFOREST THRIVES

With no one to water the plants and fertilize the soil, how does the forest stay alive? The key is in the mycelium network of bacteria and fungi which lives around the roots and into the farthest depths of the Earth. Within the soil is a mass web of microorganisms that connects the entire soil environment and transports water, nutrients and living organisms throughout the forest in an intelligent web-like manner. When an animal leaves manure in the soil, the mycelium sends up decomposing organisms to break down the manure into nutrients that are evenly distributed to the plant in the entire forest.

GRO-KASHI mainly contains anaerobic bacteria and some strains of fungi that live harmoniously with the plant. Because GRO-KASHI absorbs an unimaginable range of probiotics during its birthing process, we do not guarantee  microbes on our product label or to the public. Our hand-made, living product is different from most lab-made probiotics at the garden store.

Probiotics are the life of the soil, breaking down minerals, producing humics, and intelligently coordinating the immune and nutrient uptake systems in the soil. These beneficial and anaerobic bacteria work side-by-side with additional aerated microbes and soil life to form the crucial soil web. GRO-KASHI can make a plant grow to its full potential with little more than compost, water and minerals.

“A few LAB are pathogenic for animals, most notably some members of the genus Streptococcus. In humans, Streptococcus pyogenes is a major cause of disease (strep throat, pneumonia, and other pyogenic infections, scarlet fever and other toxemias).”

“Lactic acid bacteria are among the most important groups of microorganisms used in food fermentations. They contribute to the taste and texture of fermented products and inhibit food spoilage bacteria by producing growth-inhibiting substances and large amounts of lactic acid. As agents of fermentation LAB are involved in making yogurt, cheese, cultured butter, sour cream, sausage, cucumber pickles, olives and sauerkraut, but some species may spoil beer, wine and processed meats.”

“Streptomyces Platensis is really helpful with the fight against cancer? This bacteria produces Migrastatin, an anti cancer compound thanks to its second mebabolism!” “Streptomyces platensis can produce lergotrile which shows benefit for the fight against Parkinsonism and it can be used  to reverse infertility in women?” http://bioweb.uwlax.edu/bio203/s2008/talhouar_gael/index.htm

“Over 50 different antibiotics have been isolated from streptomycetes, providing most of the world’s antibiotics”

How do forests survive in nature without automatic sprinklers and chemical nutrients and pesticides? The answer is through the cooperation of millions of organisms working together above and below the surface of the soil.

“We know more about the movement of celestial bodies than about the soil underfoot.” – Leonardo Da Vinci.

In nature, everything happens harmoniously. It does not require any human work or synthetic addition. 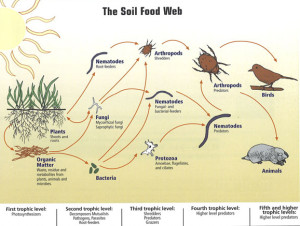 See how bacteria are absorbing radiation inside Chernobyl

Paul Stamets talks about how to save the world with mycelium

Effective Microorganisms in Hawaii being used on animals and plants

To learn much more about probiotic farming and the benefits of probiotics, please visit the Probiotic Farmers Alliance on Facebook!

One Response so far.

We are a team of dedicated farmers seeking to bring the world the potential of fermentation and microbes in nature. Our desire is to improve your life and potential for success. Be probiotic.